Charlotte Douglas International Airport (CLT) claimed a spot on the industry’s architectural and design map for “placemaking” with a nine-gate concourse expansion it debuted last summer. The new $200 million concourse addition is the first major gate development at the airport in 16 years and represents a 10% increase in total gate capacity, notes Aviation Director Brent Cagle.

Cagle’s desire to “do something different and impactful” with the new space led to considerable variances from existing CLT facilities. Perhaps the most notable is a highly visible public art display that draws attention from inside and outside the terminal. 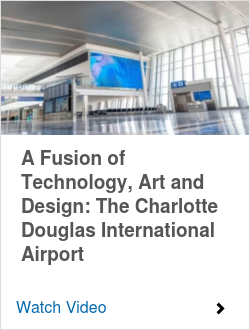 Using C++ programing language in conjunction with elaborate media servers, Anadol’s modern streaming installation collects live data from the airport in three-month increments and siphons them through an algorithm that paints canvases as airport visitors watch. The live images intermingle with geometric shapes, liquids and numbers on a NanoLumens 140-foot-by-9-foot display at eye level for visitors inside the terminal. Images are also projected on two overhead trapezoid displays, each spanning 600 square feet. All three displays can be clearly viewed from the glassed exterior of the airport.

“When you approach the airport, Interconnected really becomes the first element of the terminal that you see from the roadway,” says Cagle. “It certainly helps to define the look and feel of the airport, even as you’re driving up.”

The installation’s visual animations appear to be breathing as they evolve through three different chapters of an eight-minute presentation that runs on NanoLumens displays. Arch Nelson, the company’s southeast sales director, says that the displays provide an extremely vibrant color palette on a low-touch technology that is very efficient and different from its projection predecessors.

“All of our technology is engineered to be lighter, thinner and greener—not only to have a low impact on the structure of the building, but also to keep in mind the green initiatives that this building has,” Nelson explains.

NanoLumens is a US-based LED solutions expert, providing an unmatched customer experience from concept to completion. By collaborating with our clients every step of the way, we enable the freedom to create unique display solutions. If you can dream it, we can build it.