ATLANTA, GEORGIA, August 12, 2017 — As a leading creator of engaging lifestyle television and digital programming, Scripps Networks Interactive knows the power of impressive visuals. So, when the company recently began to feel that the lobby in its Knoxville, Tennessee headquarters lacked a certain impact, sizzle or ‘wow’ factor, they decided to give it an exciting visual update. To do this, they implemented a redesign that was completed in March 2017.  They hired the nationally known video collaboration and strategy company Whitlock to install an 8’ tall x 15.5’ wide 1.2 mm pixel pitch Nixel Series™ LED display from NanoLumens, the award winning creators of uniquely compelling interactive LED visualization solutions.

According to Whitlock Account Executive Erica Fox, Scripps Networks Interactive felt the space seemed out of date, and it was her job to come up with ideas and a concrete solution to deliver an ultra-modern video presentation solution that would shine in 2017 and for years to come. Having previously specified NanoLumens LED display solutions, she knew the company would provide exactly the type of engaging and exciting visual experience Scripps Networks desired.

“As a space where employees, guests and clients pass through every day, the Scripps Networks headquarters lobby should represent the hip and forward-thinking culture of the media company,” Fox explained, “and in that regard, the current tech was less than effective. Featuring an aging multi-panel videowall that had lost its luster after about a decade of use and technological advances, the company wanted to update the space with a vibrant video solution that would impress for the next 10 years.” 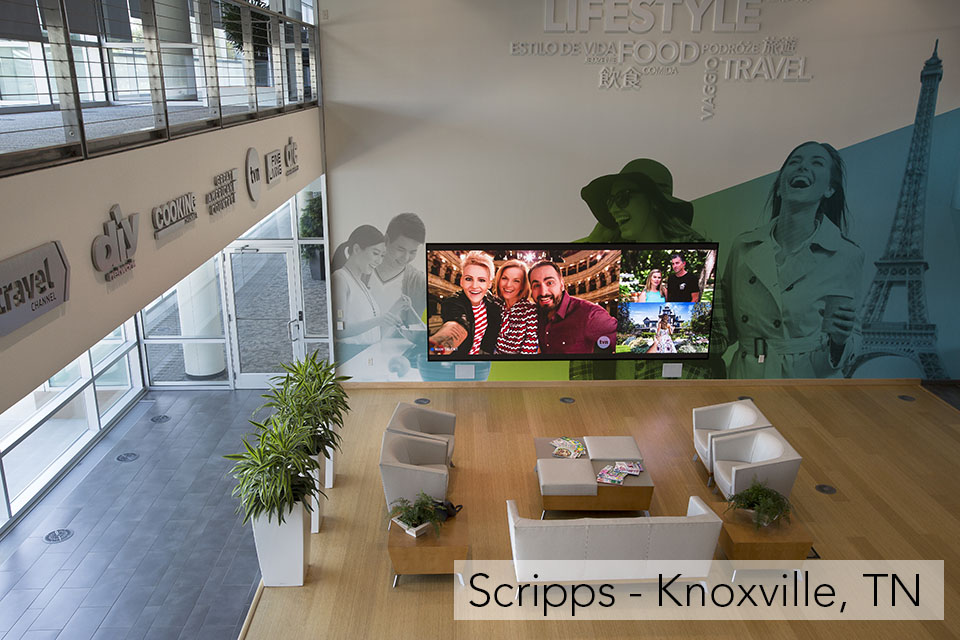 This goal of long-term relevance led Greg Moore, Scripps Networks Interactive’s Director of Facilities Project Management, to increasingly push for the latest, most technologically advanced video display solution. After learning about NanoLumens’ innovative LED displays through Fox, Moore visited the NanoLumens headquarters in Norcross, Georgia to gain a first-hand understanding of the different options and benefits offered by each NanoLumens solution.

“The company originally was fairly budget conscious, but once Greg visited NanoLumens he quickly understood the value of using the top-of-the-line product to achieve long-lasting relevance,” Fox added. “There are always considerations given to cost, but in many cases spending a bit more to utilize the highest-quality product and ensure the best result is the right decision. In this case the discussion was what pixel pitch to pursue, and the in-person demos conveyed how NanoLumens’ tightest pixel pitch, 1.2mm, made a noticeable difference for this specific application and the environment they wanted to create.”

In addition to the need for a long-lasting, impressive display technology, the brightness capabilities of NanoLumens’ technology proved important to achieve improved visibility in the often washed-out installation location. As a ground floor lobby with two-story windows, ambient light can be intense throughout the day and affect the visibility of digital displays. Another core benefit was the front-serviceable design of NanoLumens displays, made possible through the use of the manufacturers’ patented NixelTM technology, which are small panels of LED pixels that piece together seamlessly to form displays of any size, shape and curvature. Individual Nixels can be removed and replaced if necessary, greatly reducing maintenance time and costs.

For the actual use of the display, Whitlock utilized a Crestron control system and interface to provide simple operation and satisfy a multitude of use scenarios, including presets for live presentations in conjunction with installed in-wall speakers and a microphone. Through the control system, operators can project a single image or video on the entire LED display or stream 10 live TV channel feeds to ‘windows’ on the seamless display in a variety of configurations.

There are also overlapping modes, where windows vary in size and sit on top of each other digitally, providing a sense of 3D layering, much like windows on a computer screen. Programmed presets allow these changes to be made instantly with little effort, even from a mobile device or PC through a virtual X Panel Whitlock designed and delivered. This provides an extra layer of insurance against equipment issues, in case the Crestron panel fails for any reason. 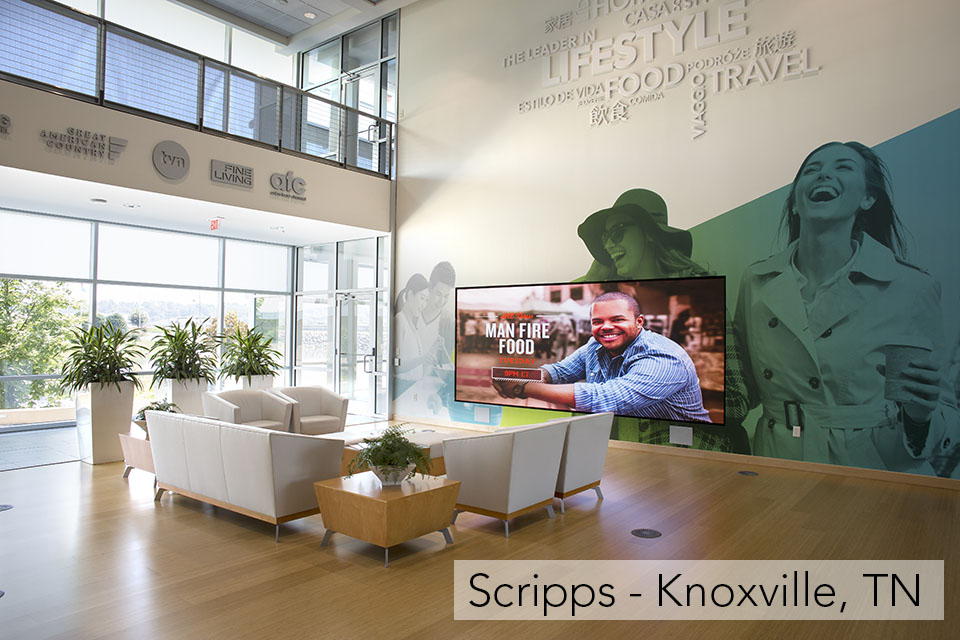 Eric Seigler, the NanoLumens Regional Sales Director responsible for this project, said there were a few other factors that made NanoLumens the final choice for Scripps Networks Interactive, with the company’s U.S.-based operations among them.  “Between the value proposition of a display that has a six-year, down to the pixel warranty, our unbeatable image quality, the fact that we engineer and assemble our displays in the United States, and the thin, low-heat design that allowed Whitlock to recess it into the wall and blend with the lobby’s architecture, Greg Moore and the Scripps Networks decision-makers were sold,” Seigler said. “Scripps Networks Interactive is a visionary organization that leads in the lifestyle content industry, and with our product they now have a leading visual system at their headquarters to match.”

Fox also noted that this project was aided by the technical knowledge of Doug Price and Eric Seigler, so that on both the purchasing and selling sides, there was always a clear understanding of the technological needs, capabilities and usage scenarios to be considered.

“At Whitlock, we always try to help our clients imagine all the different ways they may use their video technologies, and by doing so throughout the entire process we ensure that installations are as future-proof as possible,” she concluded. “We strive to give every client a robust solution that can do everything they want, and more that they may not even have considered. NanoLumens helped us do that for Scripps Networks Interactive.”